Australia with her Song "Dear Life". She reached 209 Points. On the 2nd place was

Wales and reached the 3rd place with 182 Points.

The history of Yerevan dates back to the 8th century BC, with the founding of the fortress of Erebuni in 782 BC by king Argishti I at the western extreme of the Ararat plain. Erebuni was "designed as a great administrative and religious centre, a fully royal capital." During the centuries long Iranian rule over Eastern Armenia that lasted from the early 16th century up to 1828, it was the center of Iran's Erivan khanate administrative division from 1736. In 1828, it became part of Imperial Russia alongside the rest of Eastern Armenia which conquered it from Iran through the Russo-Persian War between 1826 and 1828. After World War I, Yerevan became the capital of the First Republic of Armenia as thousands of survivors of the Armenian Genocide in the Ottoman Empire settled in the area. The city expanded rapidly during the 20th century as Armenia became part of the Soviet Union. In a few decades, Yerevan was transformed from a provincial town within the Russian Empire, to Armenia's principal cultural, artistic, and industrial center, as well as becoming the seat of national government.

With the growth of the economy of the country, Yerevan has been undergoing major transformation as many parts of the city have been the recipient of new construction since the early 2000s, and retail outlets as much as restaurants, shops, and street cafes, which were rare during Soviet times, have multiplied.

Yerevan was named the 2012 World Book Capital by UNESCO. Yerevan is an associate member of Eurocities. 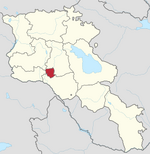 Location of the Host city

At the same day after their victory, Armenia announced that the host city will be Yerevan. The venue will be the Demirchyan Arena.

The draw that determined the semi-final allocation was held on the 25th July 2016 at the headquarters of Yerevan. The two pre-qualified countries will vote in each semi-final. After that the remaning thirty-four countries were divided into six pots, based on their geographical place. Each time a country was drawn from the pot, it´s half of the semi-final was determined.

The six pots were the following:

San Marino will also vote in this semi-final. Ten countries will qualify for the Grand Final.

San Marino will also vote in this semi-final. Ten countries will qualify for the Grand Final.