All countries give 12, 10, 8-1 points to their top ten favourite songs

Eurovisn't #3 was the third edition of the Eurovisn't Song Contest. The edition was contested by 26 countries, and won by

Switzerland's The Chef and the song "The Canniballad". It scored 225 points, finishing 18 points clear of Azerbaijan, who placed second for a second consecutive time.

The contest was in Stockholm, Sweden, the second time of a possible three, following Świętokrzyskie Voivodeship's victory for the country with "Gaining Conscience" in the second edition.

Eurovisn't Song Contest is a contest in which the songs aren't actual songs. The format of submissions to the contest ranges from only a song title to a full self-made track. The voting process is based mostly on strategy.

Most countries internally select their entry, while other countries hold national finals with multiple songs, wherein the other participants can help choose the best song.

46 countries took part in the edition. All participants other than the overall top five best-performing countries participated in two semi-finals, with 10 countries qualifying from each.

Three artists who have previously performed at Eurovisn't have been confirmed for the edition:

Azerbaijan, Iceland and Sweden will vote in this semi-final.

Australia, Luxembourg and Ukraine will vote in this semi-final.

As a punishment for war crimes, the following countries were handed an indefinite ban: 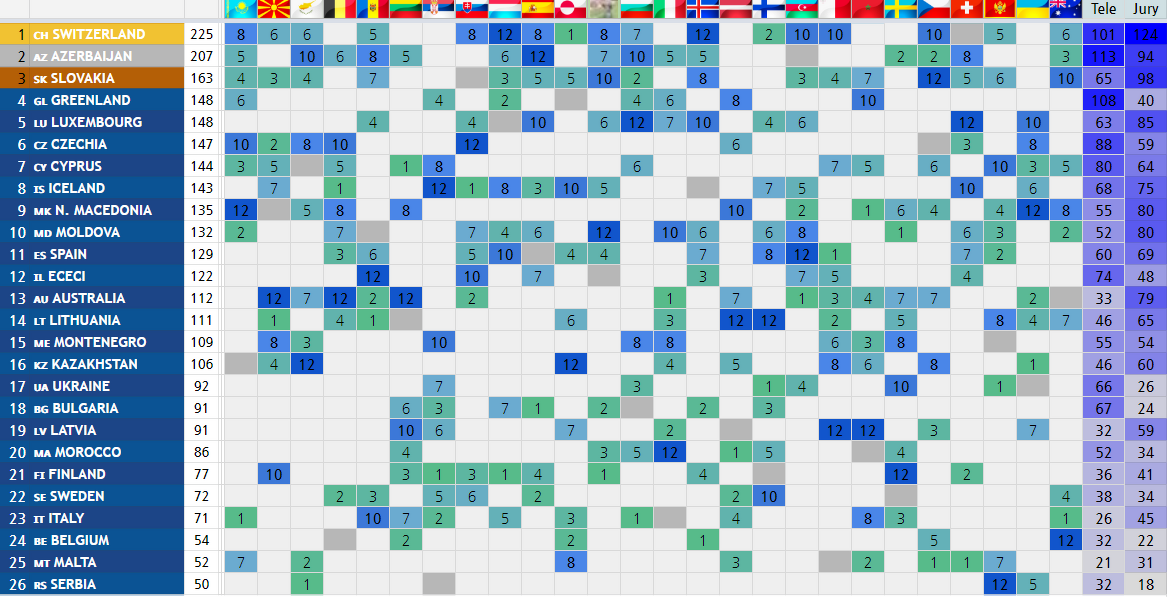 In the second edition of the Eurovisn't awards show (the first one under this name), four awards were given out — for Best Lyrics, Best Campaign, Best Design and the new addition Best Gala Look.

Following terrorist group The Cones' success in the second edition representing Azerbaijan (then ECA), many countries chose to follow the trend and submit acts known for their violent behaviour to the contest. Most notably, openly cannibalist The Chef won the contest for Switzerland, and runner-up EMELIA was supposedly a vampire, and similarly to her predecessors, constantly hinted at murderous behaviours without admitting to them directly. Triangle, a member of Slovakia's The Shapes (who placed third), is the self-proclaimed authority responsible for the deaths of all beings to have died in history, while The Doll, known for her tendency to commit massacres, came tenth for Moldova. Other examples include Cristina Catalina from Romania and Gemma Ferrari from San Marino.

Willow Tree, who represented her home country Bosnia and Herzegovina in the second edition of Eurovisn't with "My Ass", returned in the very next edition with "Fuck My Ass". Both entries placed similarly, in the middle of the bottom half of the semi-final table. An hour after the semi-final in which Tree failed to qualify, her sudden death was announced. The cause was almost immediately confirmed as murder, but despite the high amount of suspects, no arrests were made.

Veronica won the Lithuanian national selection with "Fuck Eurovisn't" and received the chance to perform at the contest against which her song protested. Her behaviour during the contest was frequently negatively criticised, from breaking into the Opening Ceremony (to which she was not invited due to her opinion on the contest) and screaming at guests, to using illegal substances on stage and getting arrested by officers in the arena.

After the show, it was confirmed that Veronica had been sentenced to prison time.

After the fifth performance of the Grand Final, Slovakia was scheduled to perform next. The show was already running behind schedule, but the Slovak performance had to be restarted after it was found that the Kazakh flag had been displayed instead of the correct flag for Slovakia. The mistake was corrected, but several broadcasters expressed disappointment in the delays experienced.