All countries give 12, 10, 8-1 points to their top ten favourite songs

Eurovisn't #2 was the second edition of the Eurovisn't Song Contest. The contest was won by

Sweden and the song "Gaining Conscience" by Świętokrzyskie Voivodeship, scoring 258 points and breaking the record both for most points scored and biggest margin of victory.

The edition was held in the Toše Proeski Arena in Skopje, North Macedonia, following Star O'Rest's victory in the first edition with their song "Signature".

50 countries participated in this edition.

Eurovisn't Song Contest is a contest in which the songs aren't actual songs. The format of submissions to the contest ranges from only a song title to a full self-made track. The voting process is based mostly on strategy.

Most countries internally select their entry, while other countries hold national finals with multiple songs, wherein the other participants can help choose the best song.

50 countries participated in Eurovisn't 2. The top six of the previous edition automatically qualified to the final, while the other 44 countries were drawn into two semi-finals, consisting of 22 countries each. Ten countries qualified from each semi-final.

The 45 semi-finalist countries (before Croatia's withdrawal) were drawn into 8 pots, consisting of 5 to 6 countries each.

Similarly to the first edition, Croatia were initially listed on the list but withdrew after the deadline. They were included in the draw and were drawn in the first half of semi-final one; they were retroactively removed.

Romania in the first edition, returned to the contest. She performed alongside Anastasya and become the first ever returning artist in Eurovisn't. In her first participation, she narrowly failed to qualify to the final; in this edition she placed 12th in the Grand Final.

Andorra, Monaco and North Macedonia voted in this semi-final.

Australia, Latvia and Ukraine voted in this semi-final.

As a punishment for war crimes, the following countries were handed a one-edition ban: 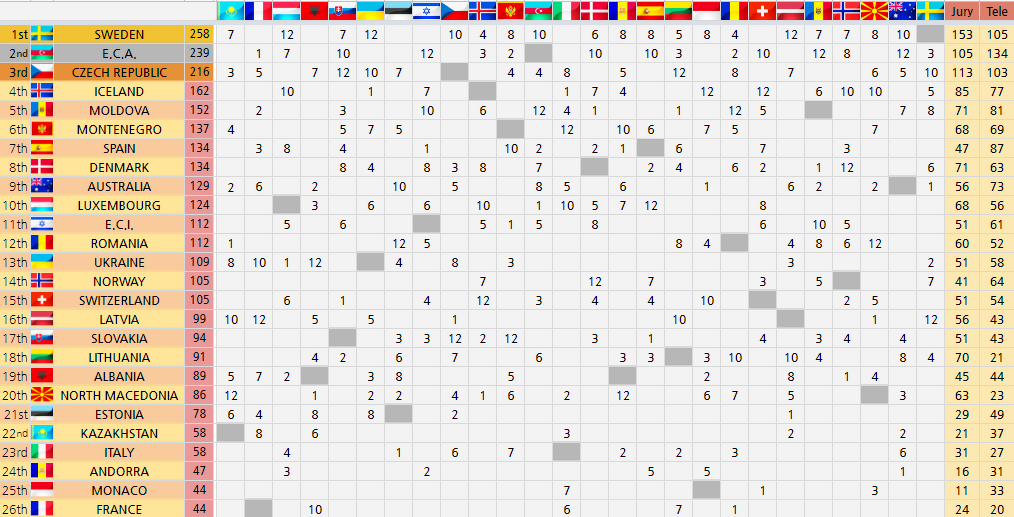 In the second edition of the Eurovisn't awards show (the first one under this name), four awards were given out — for Best Lyrics, Best Campaign, Best Design and the new addition Best Gala Look.

On 13 September 2021, in the days leading up to British national selection Please Give Us a Winner, Please Please Please #2, the BBCn't released a statement that opened with: "We're not dead, we're just waiting for the tea kettle to boil".

The heads of the Czech and Swiss delegations expressed disgust in the phrasing used, claiming that the term "tea kettle" should be substituted with simply "kettle". These claims were condemned by the Eurovisn't organisers and the head of the EBUn't, leading to outrage from several active EBUn't broadcasters.

The British forces, joined by allies from Luxembourg and Sweden, then invaded Switzerland. Several battles took place in the Czech Republic as well, but the Czech broadcaster quickly requested a ceasefire. Switzerland, who gave up a years-long pact of neutrality, attempted to retaliate but the pro-"kettle" side of the war was clearly inferior in number. Switzerland lost the war, and were threatened with having their name changed to Eurovisn't Committee of Switzerland (alternatively spelled as Committea). These threats were later proven to be empty.

Annexations of Liechtenstein and Ruswiaz

In mid-September 2021, two weeks before the contest, the Czech Republic invaded the territory of the country of Liechtenstein, which unanimously accepted the Czech government as their new leaders. Azerbaijan, who opposed the motion, decided to invade Ruswiaz (who gained full recognition by the UN't less than a month prior) and annex its area. This action caused uproar in the Eurovisn'tverse, and Azerbaijan began to lose recognition by countries around the world. As a result, they returned the Ruswiazian people their land, but the damage had already been done.

Participation of The Cones

On 7 September 2021, controversy arose when Azerbaijan announced the acts participating in their national final. The root of the controversy was one of the revealed acts — 28-member group The Cones, performing the song "Traffic Lights". The group were known to have committed several criminal offences before (most notably contract killing), and were frequently labelled by the media as a terrorist organisation.

Several of the participating broadcasters expressed fears that The Cones may attempt to murder their fellow Eurovisn't participants if they make it to the contest, and others asked for them to be disqualified altogether. However, as the acts participating in national finals are decided by the national broadcaster only, they were allowed to participate. The possibility of them winning didn't initially seem high, but due to the war in Ruswiaz, the Azerbaijani broadcaster had to be replaced, leaving the new ECA broadcaster to take over the selection system. On 11 September, it internally chose The Cones to represent the country in Skopje.

In the days leading up to the contest, five of the band's members were killed in suspicious ways — Murdered Cone, Supercone, Happy Cone, Accepted Cone and Joel Cone. Murdered Cone, the first of five to have died mysteriously, was said to have had a "suspicious stage name" that may have indicated his fate (and potentially foul play in his death). These rumours were shut down by the ECA broadcaster, who claimed Murdered was the singer's given name at birth (pronounced moor-deh-red).

The remaining members of the terrorists group arrived in Skopje on 24 September, raising safety concerns all the while becoming the big favourites to win the contest. Sources related to ITVn't heavily hinted that the deceased members of The Cones were murdered by the living members, as it was rumoured that not all 28 would be allowed to go; in reality, no Eurovisn't rule contradicts it.

On 2 October, the night of the final, the group's frontman Sad Cone passed away, although the circumstances of his death remain unclear. The rest of the band members performed in the Grand Final hours later, winning the televote but coming second, 19 points short of Sweden's Świętokrzyskie Voivodeship, in the overall result.

KILL Corporation was initially confirmed as the Israeli broadcaster for Eurovisn't #2, taking the role from KAN't who sent an entry to the first edition and failed to qualify. KILL attempted to start battles against a great number of countries in the Eurovisn'tverse, which was met with opposition from many Eurovisn't broadcaster and calls to boycott Israel.

A line was crossed when the broadcaster attempted to kill Ctibor, one of the members of Slovak duo The W.H.L. (We Hate Liechtenstein) Brothers. Ctibor was medically dead, but was resuscitated on the scene. Israel also nuked Estonia the same day, though presumably by accident.

The EBUn't made the decision to punish KILL by banning them for one edition. Similarly to what happened to Azerbaijan, KILL were made to hand over the keys to the ECI Broadcasting Authority for one edition, while the country's name was changed to ECI (Eurovisn't Committee of Israel) for the edition.

On 22 September 2021, in response to a statement by Moldovan head of delegation Sarah saying that she pours her milk before her cereal, the Swedish army invaded the country and began attacking civilians. Their actions were backed by virtually all EBUn't countries.

Moldova were threatened with having their name changed to Eurovisn't Committee of Moldova, and a referendum was held on the matter, voting in favour of the name change, however the EBUn't eventually decided against due to harsh disagreement by the Italian and Lithuanian broadcasters.

As the song submission deadline approached, a mistake was spotted in the list of participating broadcasters — Both TRTn't and TRTRTRTRTRTn't had submitted entries to represent Turkey at the contest, and since both broadcasters were active EBUn't members, there was no clear course of action to be taken by the EBUn't.

Two entries were thus received by the EBUn't, "Ain't No Sunshine (When Turkey's Gone)" by Konçita Worst and "Lower than Zero" by James Oldman. On 18 September TRTn't ultimately decided to step down, so their entry "Ain't No Sunshine (When Turkey's Gone)" was automatically withdrawn. Eventually. "Lower than Zero" was also withdrawn when James Oldman was found guilty of arson. Instead, a tribute band formed by friends of Oldman (named James's Friends) represented their country with the aptly titled "what the fuck james".

On 21 September 2021, hours before the midnight song submission deadline, Latvia (who were automatic qualifiers in this edition) were one of five countries that had not yet confirmed their entry for the contest. The other four countries (Bulgaria, Kosovo, Romania, UK) were all scheduled to host the finals of their national selections the same evening, so suspicions arose that Latvia could miss the deadline and be forced to withdraw, thus giving their automatic qualifier spot to Luxembourg.

As the deadline approached, more and more attempts to contact the Latvian head of delegation were made, until a theory arose that the person in question may have passed away. The most recent update posted by them on social media detailed consumption of 2.0 litres (0.528 gallons) of smoothie and experiencing "consequences".

The smoothie overdose theory was debunked by the Latvian head of delegation themselves, who appeared an hour or so later, and held a rapid national final, won by hamster. and their song "PERISH".

Alexa Rambarran, better known as French Girl, was announced as a participant of Swedish national final Melodifakestivalen on 5 September. She won her semi-final and advanced to the final of the selection, widely believed to be the favourite to win the final, which was scheduled for 20 September. However, when she was announced as a participant in the nearby Finnish selection, she was forced to withdraw.

French Girl eventually won the selection in Finland and participated in Eurovisn't. In Sweden, meanwhile, her entry was performed by the Swedish head of delegation, and tied for first place, losing out in the tie-break to the eventual Eurovisn't winner due to a worse televoting result.